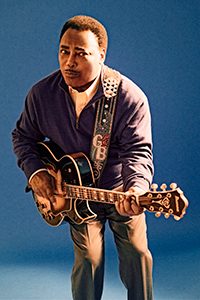 The legendary George Benson’s eight UK shows  in June/July 2021 have been rescheduled  to June 2022 – due to the ongoing  coronavirus  and the current situation of restrictions on events. This includes one night at London’s most iconic venue, the Royal Albert Hall on June 26th, 2022.   Tickets will remain valid for the new dates.

The live shows will feature George Benson’s masterful guitar playing, and Benson and his band will perform his Greatest Hits from his impressive back catalogue – which includes such classics as Give Me The Night, Lady Love Me (One More Time), Turn Your Love Around, Inside Love , Never Give Up On A Good Thing and In Your Eyes and more…

Benson’s latest album, ‘Weekend In London’, is an electrifying live album capturing his 2019 performance at  the intimate 250-seat Ronnie Scott’s Jazz Club.  It’s almost a half-century has passed since George Benson played at Ronnie Scott’s as the hottest property on the US jazz scene of the early 70s!

Benson is one of America’s great guitarists, a virtuoso who’s been honoured by the National Endowment of the Arts as a Jazz Master. He’s won a dynamic 10 Grammys, including record of the year for his triple platinum ‘Breezin’. His wins include Record of the Year for “This Masquerade” (1977), Best Pop Instrumental Performance for “Breezin'” (1977) and “Mornin'” (2007), Best Male R&B Vocal Performance for “On Broadway” (1979) and “Give Me the Night” (1981), and Best R&B Instrumental Performance for “Theme From Good King Bad” (1977) and “Off Broadway” (1981)