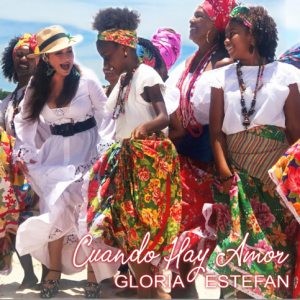 “Cuando Hay Amor” is “a musical celebration of the singular power of love through all its various forms of expression,” said Estefan.  “For that reason, we wanted to create a true musical fusion to best exemplify that power and chose ‘Samba de Roda’ mixed with rhythms and instruments that have been heard throughout South America, and particularly in Colombia. ‘Samba de Roda’ is a traditional Afro-Brazilian dance originally performed as informal fun after a Candomblé, using the same percussion instruments that are part of the religious ceremony.”

“Cuando Hay Amor” was written by nineteen-time Grammy® Award winning Producer Emilio Estefan with Nicolas Tovar and Andrea Lopez. The song is one of four original compositions that will be featured on Gloria Estefan’s upcoming album, Brazil305, recorded in Miami and São Paolo, Brazil.

“ln the video for ‘Cuando Hay Amor,’ we wanted to highlight the movements and singing of the beautiful Bahianas, who are important historical representatives of the Samba culture,” said Estefan.

“Cuando Hay Amor” will be available on Spotify, iTunes, Apple Music and wherever music is sold and streamed.

With worldwide sales of over 100 million records during her legendary career, Gloria Estefan has garnered 38 #1 Hits on the Billboard charts. She is a seven-time Grammy® award-winning singer, actress, songwriter, author of two New York Times best-selling children’s books, philanthropist and humanitarian. She is considered one of the world’s most recognizable and beloved performers and one of the most successful crossover artists in Latin music history.  Emilio & Gloria Estefan were the first couple to receive the Presidential Medal of Freedom, and Gloria was the first Cuban American singer-songwriter to receive a Kennedy Center Honor.  The couple was also honoured with the prestigious Gershwin Prize for Popular Song by the Library of Congress.  In addition, the smash Broadway TONY® Award nominated musical ON YOUR FEET! was based on their lives and music.