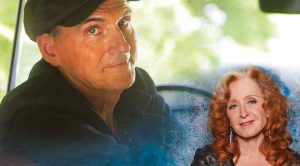 Legendary singer-songwriter and multiple Grammy award winner, James Taylor & His All-Star Band, has teamed up with Bonnie Raitt (and her band) to announce an extra UK show in Cardiff, Motorpoint Arena on July 17th. Tickets go on sale: Friday March 9th @ 9.00am

They will now be playing four special UK shows in July 2018 – in Manchester, Glasgow, Leeds and Cardiff.

Taylor and Raitt are long-time friends and had a highly acclaimed US tour last year that played to sold-out crowds.  They are continuing another run of dates in the US this summer, including two shows at the Hollywood Bowl in Los Angeles, before heading across the pond for the first time touring together in the UK, including dates in London at Hyde Park and Dublin at the RDS Arena.

As a recording and touring artist, James Taylor has touched people with his warm baritone voice and distinctive style of guitar-playing for more than 40 years, while setting a precedent to which countless young musicians have aspired.  Over the course of his celebrated songwriting and performing career, Taylor has sold more than 100 million albums, earning gold, platinum, and multi-platinum awards for classics ranging from Sweet Baby James in 1970 to October Road in 2002. In 2015, Taylor released Before This World, his first new studio album in thirteen years, which earned him his first ever #1 album.  He has won multiple Grammy awards and has been inducted into both the Rock and Roll Hall of Fame and the prestigious Songwriters Hall of Fame.  In 2012, Taylor was awarded the distinguished Chevalier of the Order of Arts and Letters by the French government and the National Medal of Arts by President Barack Obama in a White House ceremony.  In November 2015, Taylor was presented with the Presidential Medal of Freedom, the nation’s highest civilian honor. In December 2016 Taylor received the Kennedy Center Honors, which are presented annually to individuals who have enriched American culture by distinguished achievement in the performing arts.

Bonnie Raitt is more than just a best-selling artist, respected guitarist, expressive singer, and accomplished songwriter, she has become an institution in American music. Born to a musical family, the ten-time Grammy winner, who Rolling Stone named as both one of the “100 Greatest Singers of All Time” and one of the “100 Greatest Guitarists of All Time,” was inducted into the Rock and Roll Hall of Fame in 2000. After 20 years as a cult favorite, she broke through to the top in the early 90s with her GRAMMY-award winning albums, Nick of Time and Luck of the Draw, which featured hits such as, “Something To Talk About” and “I Can’t Make You Love Me.” 2017 proved to be an exciting year with tour dates in Australia, New Zealand, Hawaii, Canada and across the U.S. (including 17 dates in the support slot for Taylor) building on the success of 2016’s trek which saw Raitt perform over 75 tour dates worldwide following the release of her twentieth album Dig In Deep (Redwing Records). As a follow-up to 2012’s triumphant Slipstream—the Grammy-winning, Top 10-charting first release on her independent label—Dig In Deepillustrates the delicate balance of consistency and risk-taking that has defined Raitt’s remarkable career for more than forty-five years—a career where she is as known for her lifelong commitment to social activism as she is for her music regularly incorporating on-tour fundraising for charity and benefit concerts into her schedule.