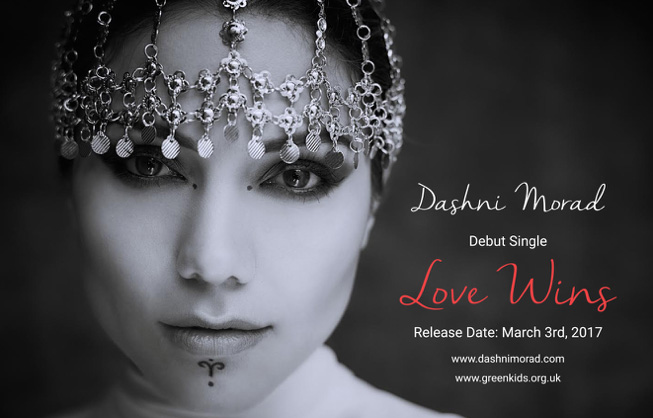 She releases her debut UK single, the uplifting and inspirational ‘Love Wins’, on March 3rd. An impassioned plea for support for refugees and migrants around the world, ‘Love Wins’ sends out a message that love can overcome hate, and unity can overcome division, at a time when the world really needs to hear it.

A former refugee and migrant herself, Dashni plans to donate proceeds from the single to a charity close to her heart, Green Kids (www.greenkids.org.uk), which she set up to provide support to children in poverty stricken and war torn areas, such as child refugees. With a focus on education, Green Kids has donated over 200,000 books to schools affected by war and the two libraries that it has established at refugee camps in the region, with further donations being arranged by Green Kids UK in partnership with schools in London.

Having rocked the establishment and challenged the status quo on issues such as women’s rights, child access to education and environmental protection for over ten years back in her homeland, Dashni is now taking the refugee and migrant fight to the international community.

“Music defeated Apartheid and brought down communism, so Trump really doesn’t stand a chance”, says Dashni, in the hope that artists will unite in a musical revolt. “We need to show the victims of this terrible war, that the world has not forgotten about them”.

A symbol of what, despite the odds, refugee children can achieve, Dashni’s story is one that needs to be heard.