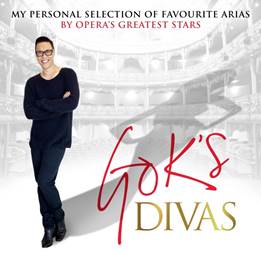 Gok Wan, has teamed up with the renown classical recording company,  Warner Classics to release an album of his favourite arias: Gok’s Divas, released on 10 March, 2017.  The album brings together some of the most celebrated, and beautiful, operatic showstoppers ever written. The collection has been lovingly curated by the man with the enviable fashion sense and the trademark glasses. It’s a role he took very seriously indeed – and with much relish.

“Opera, as we know it, is quite a closed community. But I wanted to build bridges for people who felt just like me, people who loved the music and wanted to find out more, I suppose I’m here to say:  Opera is for everybody. It’s for all of us.”

Gok’s Divas, brings together 30 classic numbers from the world of opera and musical theatre. It features works by Puccini, Bellini and Mozart alongside Bizet, Gershwin and Bernstein. There are familiar, breath-taking moments like Maria Callas singing Casta Diva, Dame Kiri Te Kanawa singing Un bel di vedremo and Montserrat Caballé’s O Mio babbino Caro, and there are newer treatments of old treasures: Natasha Marsh with Alfie Boe singing the ‘drinking song’ from Verdi’s ‘La Traviata’ and Katherine Jenkins singing the original French language version of I Dreamed A Dream  from ‘Les Miserables’. Like a musical massage, it’s all luxuriant in the way that other music rarely is.

“I think I first discovered opera in the 1980s,” Gok says. “I remember watching a film called The Hunger, with Catherine Deneuve and David Bowie. It was about vampires, and it had this song in it, The Flower Duet by Delibes, which I just absolutely loved. My ear immediately became sensitive to it.”

And he has been developing that ear ever since. By his late teens, he was studying performing arts.  “That was when I started listening to opera more and more: to Madame Butterfly, to Tosca and Puccini and beyond. The more I heard, the more I loved.”

With Gok’s Divas, he has thrown open a door, and is encouraging all of us to step inside, to look around, and fall, like him, in love with the sumptuousness of it all.